The Low Down – Momentum Works
Home Genre POM A brand in Indonesia tried newsjacking, and it went very wrong

Recently, the Indonesian Twitter feed was shaken by a user (@duniadian) uploading a complaint letter he got from a local brand called Eiger. The post gained 47.5k retweets and 8.1k replies

Eiger itself is a renowned local brand, focusing on outdoor gear. This company produces products for mountain climbing, camping, and rock climbing activities such as bags and jackets.

Founded by Ronny Lukito in the 1990s, the first Eiger store opened in 1994 in Cihampelas, Bandung. Now, it has approximately 155 stores located in Indonesia.

The Twitter user @duniadian owned a YouTube channel where he put his review of his Eiger gear.

And the complaint letter from Eiger was about the video of @duniadian reviewing a pair of Eiger sunglasses.

The main points of the complaint from Eiger were:

And thus, the Eiger “wished” him to fix and/or delete the content of the review – which eventually Eiger’s reckless action was condemned by the public.

For those who can read the Indonesian language, the full complaint letter from Eiger is like this. 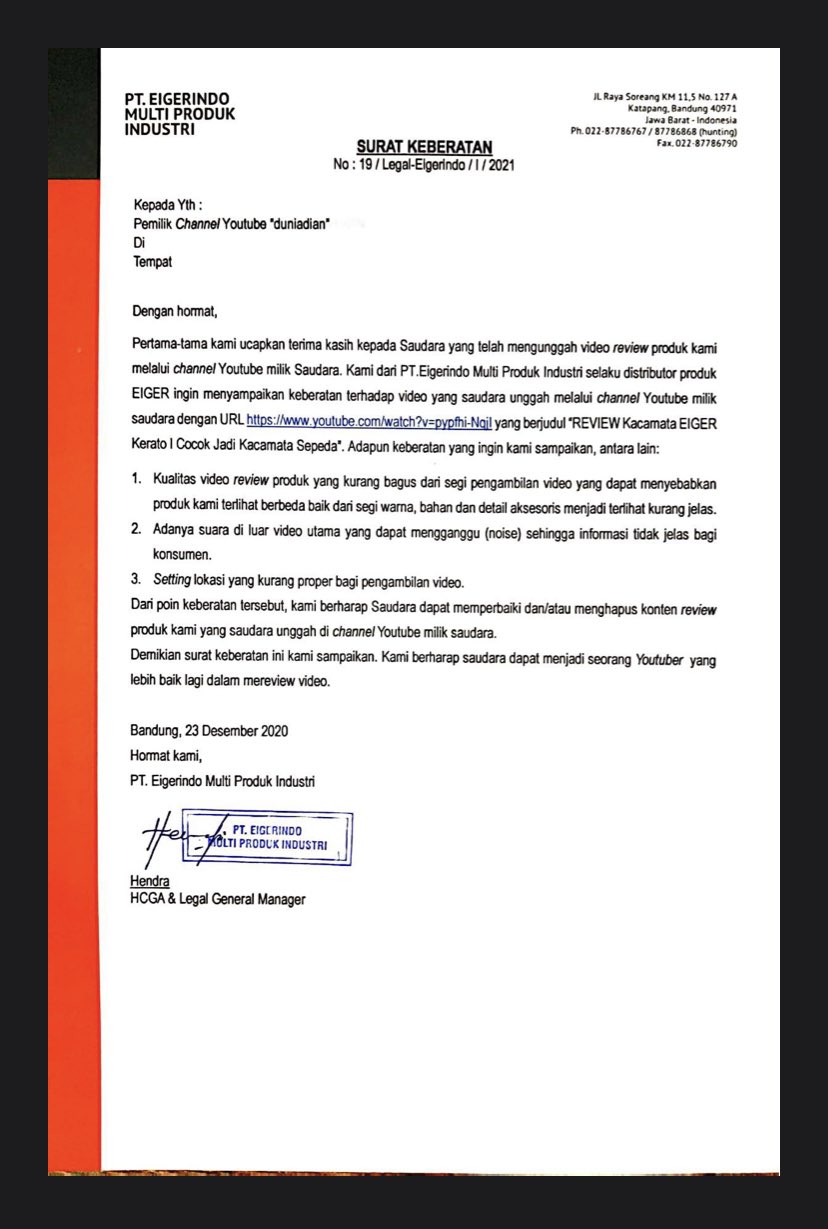 It was not a sponsored video and the tone of the video was not negative. Instead of sending such a complaint letter, the company could have used many ways to turn this review into a free endorsement opportunity.

Insead, the letter ignited a rage, with many Eiger ‘fans’ swearing not to buy the brand’s products anymore.

As this topic was trending up, other companies jumped in to try to ride the wave. Eiger’s direct competitor, Arei, published on Instagram a letter called “Surat Keringanan” (relief letter) — literally an opposite to Eiger’s “Surat Keberatan” (complaint letter).

The letter tells people that they have every right to review the Arei products using any cameras, any themes, and in any location as much as they like:

Many more are jumping the “love letter” bandwagon. Here are 4 examples amongst many of them.

While these brands were getting compliments for being creative and making use of the timing (and these brands are gaining public attention as well), an unfortunate event happened to First Media, an internet service provider in Indonesia.

Unlike the other brands which got positive feedback from the public, the letter from First Media ignited the cynical response. So what went wrong?

This is what they posted:

The notice translation is below:

Translation of the letter

To all Indonesian at home,

With this letter, we, First Media, as ISP and TV cable provider which the unlimited is #literallyunlimited states that all people have the right to review or to give testimony of our services:

Thus, this notice is made as it is with the shortest time possible

The main reason is because of the reputation of First Media itself.

If you go to Twitter and check the search bar, they are getting complaints about their bad connection 24/7.

And when they sent out “love letters” for their customers to publicly “criticize” them, it was perceived as funny. The customers have been complaining and giving actual reviews everyday, to deaf ears – their service has not improved.

Newsjacking has been proven as an effective marketing practice. What we can learn from this Eiger-newsjacking is that brands can’t Newsjack every story.

And in order to do it effectively, brands should know themselves well enough to know what works and what doesn’t, and don’t force it.

Clearly, First Media was not aware of what works for them before the incident. But now, they have known enough that in their position, Newsjacking doesn’t work.

Thanks for reading The Low Down (TLD), the blog by the team at Momentum Works. Got a different perspective or have a burning opinion to share? Let us know at [email protected]

Momentum Academy is hosting a candid Web3 zoom session “Off the Record: Web3’s brutal year“ to explore the macro logic, the trends we foresee for 2023, and what it means for investors, entrepreneurs, innovators and decision makers.

Southeast Asia’s food delivery sector endured strong headwinds in 2022, as offline reopened, and investors demanded profitability. The sector YoY GMV growth in 2022 was a modest 5% (to US$16.3 billion).

Join us on 18 January between 3-4pm SGT as we uncover Southeast Asia’s food delivery landscape in our third annual food delivery report.

Kuaishou IPO is another big win for Tencent

Are Google and Facebook still your best marketing tools?

Why did Grab increase its incentives drastically in Q4 2021?

How corporates can learn from the messiness of Don Don Donki

[Seeing the unseen] Why are Chinese tech giants missing from the...

ABOUT US
The Low Down (TLD) is a blog by the team at Momentum Works. Here we share our thoughts on tech & VC in China, Southeast Asia and beyond. Find out more about us by heading to our website.
Contact us: [email protected]
FOLLOW US
© 2016 - 2021 Momentum Works
Loading Comments...