Around November 11th, a less famous APP ranked at the top of APP download list in Indonesia for several days, not only surpassing Whatsapp, which always ranks top in download list worldwide all year round, but also surpassing the stars during Double Eleven Shopping Spree such as Shopee and Lazada. 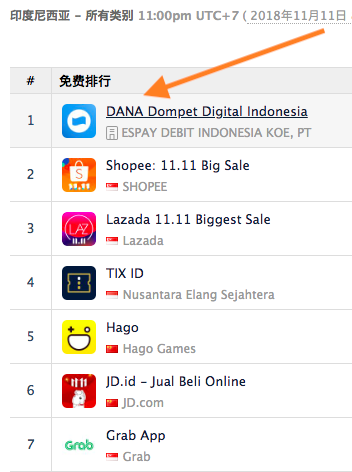 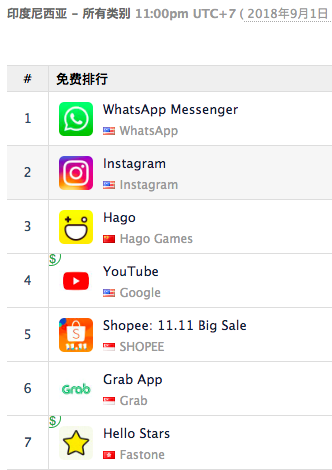 “DANA” means “wallet” in Indonesian language, and as the name implies, it is an e-wallet. But it’s not an ordinary e-wallet with Ant Financial and local Indonesian tycoon behind.

Founded in 1983, Elang Mahkota Teknologi amassed its first pot of gold with the exclusive rights to distributing Compaq computers. It later switched to the media business, and

In April 2017, Ant Financial announced to establish a joint venture together with Emtek to develop mobile payment products.

Why did Ant Financial choose Emtek? The reason is Blackberry, another key ally of Emtek.

In June 2016, one year before the cooperation between Ant Financial and Emtek, Blackberry reached cooperation agreement with Emtek. According to the agreement, Emtek provides content and services for BBM users, and BBM adjusted its strategic goal as building an ecosystem with instant messaging at the core, including social networking, e-commerce, services, games, etc. It aims to be Indonesia’s WeChat.

That goal was once close at hand. Blackberry BBM was once the second-largest chat app in Indonesia with more than 50 million users.

Though Emtek announced it as cooperation, it is widely believed that Blackberry sold this business to Emtek. Emtek paid $207.5 million for six-year operating rights of BBM.

Alibaba is weak in social scenarios most, so it’s no wonder Ant Financial chose Emtek.

“DANA” was launched in March 2018. However, DANA was less noticed. And with the rise of Line, BBM’s market share rapidly declined.

In Indonesia, no social software is as dominant as WeChat yet, nor any dominant e-commerce. There is no such duopoly as Alipay and WeChat payment. At present, all strong players are taking their chance.

Telecom operators, banks, e-commerce, travel tools, and large consortia all operate in their own ways, and develop respective e-wallets. It is understandable. The development of third-party payment in China has set a good benchmark, and none of the five groups will give up its access easily.

It’s no surprise that Go-Pay ranks top. Travel is probably the most popular online application scenario in southeast Asia right now. Go-Jek and Grab have both made payments a major field. Their strategy is simple: acquire users and develop user habits by relying on high coverage rate and high frequency Apps, and join up third parties in large scale, so as to ultimately achieve full coverage.

Go-Jek is relatively successful in turning drivers into a pervasive network of tellers, and the convenience of e-wallets in payment has created a large and ever-growing user base.

Ant Financial could be upset now. In last May, Tencent invested $1.2 billion in Go-Jek, followed by JD.com. Consequently, Indonesia’s most promising unicorn is now in the camp of Tencent.

OVO, the fourth most popular player, shouldn’t be neglected. The top three players, namely Go-Pay, T-Cash and Paypal, have worked in Indonesian market for years, while OVO is a rookie, only established in 2017. But OVO is very eye-catching with increasing number of users. In the App ranking, it has been in the top in financial category.

Grab, Go-Jek’s biggest rival, has not got its own payment license yet and thus has to work with OVO. It is also true with Tokopedia, another e-commerce unicorn.

However, currently, the user gap is not very large, and the market pattern is still changing. An exact case is DANA, a play younger than OVO, but topping the list only six months after release.

According to the statistics of App Annie, DANA started to promote before November 11, and reached the top on the 9th, but its ranking fell back after November 11. Even under the “financial” subdivision, it ranks behind OVO.

Now that the BBM is declining, how does DANA manage to take the lead?

The main reason is its promotion activities during the Double 11 Spree Festival. During the period, DANA and its partners, including Tix.ID, Bukalapak, KFC and Ramayana, all held sales promotion of buying some goods only at 11 Indonesian rupiah.

Tix.ID, a film ticket platform, contributed most to DANA’s top rank. DANA is its main payment partner. The Indonesian employees of Momentum Works said, during the period, users could get a buy-one-get-one-free discount if they buy film ticket on Tix.ID through DANA. It is a real bargain.

The promotion started on November 4 and was heavily advertised. Indonesian staff said they even heard the ads on the radio this morning. However, the proportion of payment failures is also relatively high, so the user experience needs to be further improved.

Bukalapak, an e-commerce business owned by Emtek, is also gaining momentum as a newly promoted unicorn in 2018. Bukalapak, unlike Shopee and Lazada, focuses on second-and-third-tiered cities. Its web is more like a “flashbuy” ecommerce.

Currently, Bukalapak has its own e-wallet named BukaDompet, but also has access to other payment methods such as Dana. Maybe it will have more collaboration with Dana in the future.

However, DANA’s advantages are not unique. The payment pattern in Indonesia is far from unchanged. DANA has a great potential to become one of the major players, but it is still difficult to challenge Go-Pay and OVO at present.

It is also possible that the payment in Indonesia could turn into a situation where various forces control their respective payment scenes, and the duopoly scenario such as Alipay and WeChat controlling the market will not appear for a long time.

Click the image below to know more details about the report. More reports will be made available progressively. For any further queries, you are welcome to email us insights@mworks.asia

Is Alibaba’s antitrust crisis over?

Check out our latest report!

Momentum Works has recently published its Food Delivery Platforms in SEA Report, which provides an in-depth analysis of the Southeast Asian food delivery industry. This report analyses the industry from both a macro and micro perspective, providing a comprehensive overview of the food delivery ecosystem in the region, as well as a critical comparison between the players.

What are the Industry Enablers in Southeast Asia?

Lazada’s new song is an ode to Shopee

Uniqlo, Muji & Daiso all in one, but Chinese?

ABOUT US
The Low Down (TLD) is a blog by the team at Momentum Works. Here we share our thoughts on tech & VC in China, Southeast Asia and beyond. Find out more about us by heading to our website.
Contact us: hello@mworks.asia
FOLLOW US
© 2016 - 2020 Momentum Works